This blog first appeared on Talk Poverty and was re-posted by Bill Moyers & Company.

Imagine the face of senior poverty. Who do you see? If you see a woman, especially a woman of color, you’d be spot on. That’s because the same challenges that affect women in their younger years, follow them and magnify as they age—income inequality, low wage jobs, discrimination, societal expectations of women as caregivers, lack of financial education. When you add declining health, longevity as compared to male partners, racial disparities, and disability to the mix, the result is a full-blown crisis of illness, hunger, depression, and isolation.

It should therefore come as no surprise that 1 in 5 women over age 65 who lives alone in America is living in poverty.  Yet it isn’t even on the political or media radar. I’m talking about women who must make daily choices between heat and medicine—who consider suicide on a regular basis, like the women in this video. 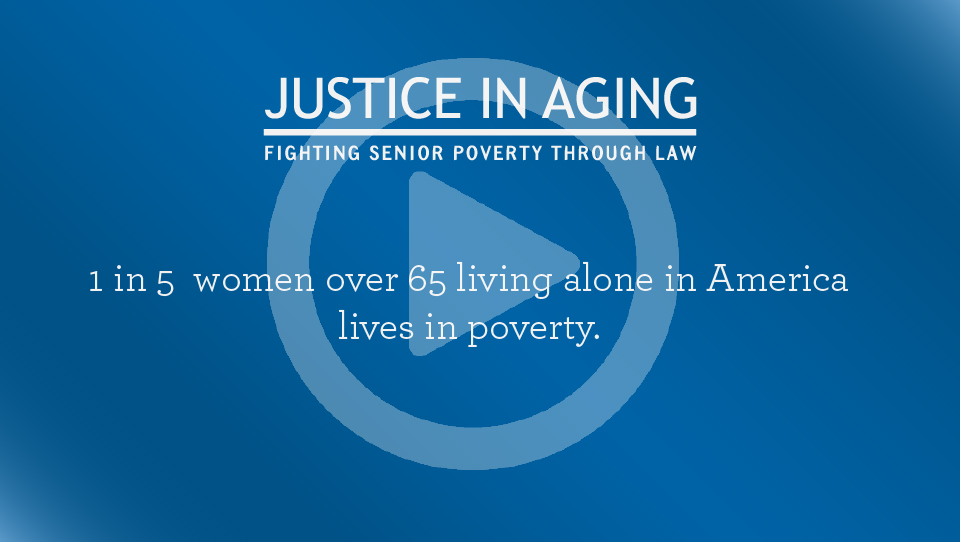 Sandy, Myrtle, Lidia, and Dolly agreed to share the struggles they face in their daily lives in the hope that if enough people learned the truth and spoke out about it, politicians would be forced to listen and to act on behalf of low-income seniors by preserving and expanding the programs that help these women survive – Medicaid, Medicare, Social Security, and the Supplemental Security Income program.

The life events that led these women to their current situations could happen to many women we know. They are not unusual, just everyday misfortunes and disappointments—magnified by age and economic vulnerability.

Like many poor Native American women of her generation, Dollie received only limited formal education. She came to California from Oklahoma with her family as a child and had to quit school and go to work when her father became ill. Her lack of formal education led to a lifetime of low-wage, physically demanding jobs that made saving impossible. Because many of those jobs were “off-the-books” she didn’t build the work history necessary to qualify for Social Security. She now relies on her monthly Supplemental Security Income (SSI) benefit of $877 to survive.

Sandy had a good job as a registered nurse, and a middle class standard of living. She lost her husband and her ability to work her physically demanding job around the same time, leaving her with no income. Because she had a good job, she receives just enough Social Security to be disqualified from means based assistance like Medicaid and subsidized housing.  As a result she spends a large percentage of her monthly income on rent, leaving little money to cover food or her Medicare copayments and premiums.

Lidia came to the U.S. from Cuba as a child. For 20 years she ran her own barbershop business, while she raised a family, bought a home, worked hard, and thrived. She became too ill to cut hair about the same time as the housing market collapsed. She lost her home and unknowingly signed away her rights to her ex-husband’s police pension, depriving herself of around $1,800 per month in benefits. Today she lives in subsidized senior housing, struggles to afford food, and tries to avoid relying too much on her children for help.

Myrtle had a good job and a big plan for travel when she retired. Then she got injured at the workplace and had to go on disability.  Her husband then divorced her. She managed to keep her home, but she struggles daily with medical and other expenses on her limited Social Security Income benefit.

These women and growing numbers of others like them have nothing to rely on but the limited and increasingly threatened social safety net programs—like Medicaid and SSI. We all need to fight hard to preserve and expand these programs—especially with a new Congress that appears committed to reducing the assistance these programs provide.

The solutions to senior poverty are well within our grasp. As a country we have the ability to ensure that every senior has access to a safe place to live, healthy food to eat, and affordable, accessible medical care—in essence the right to age in dignity. The first step is to highlight the problem by sharing the stories of those who are suffering, then we can fight hard to preserve and expand the services they rely on to survive. Please start by sharing this blog and video.