A misguided policy that nearly made Rosa Martinez homeless is rearing its ugly head again. Rosa Martinez, a California resident whose disability benefits were stopped because the Social Security Administration mistook her for a Florida woman with the same name, was Justice in Aging’s lead Plaintiff in the case Martinez v. Astrue. In that case, and a similar one we brought with our partners, Clark v. Astrue, we successfully challenged the Social Security Administration’s (SSA) policy of withholding benefits of people just because of outstanding warrants, or just because they happened to have the same name and birth date as a person with an outstanding warrant. Affected people were frequently unaware of the warrants, which were usually old and often issued for minor infractions such as bounced checks, unpaid fines or fees, or failure to pay a debt. 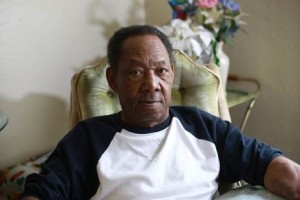 Erroll Barrett, one of the class members in Martinez v. Astrue

The policy began in the 1990s, and affected hundreds of thousands of people until 2011, when SSA, as a result of the court’s order in Clark, stopped its illegal practice of relying on outstanding warrants to deny benefits to elderly individuals and people with disabilities. The policy was nicknamed the “fugitive felon” policy, but the people it hurt were rarely fugitives or felons. People like Joseph Sutrynowicz, a Miami, FL resident whose Social Security Disability Insurance (SSDI) benefits were cut off in 2008 because of a tweve-year-old warrant from Abilene, TX  for writing a check with insufficient funds at a grocery store. He was in Abilene on a temporary job assignment and never learned about the charges against him until receiving the notice from SSA. Or Erroll Barrett, the man featured in this video, who lost his benefits for wrongly being accused of fleeing from the law. People of color who were disproportionate targets of law enforcement were also disproportionately hurt by the policy.

The one thing that all of these cases have in common is that the law enforcement agency that issued the warrant was not interested in pursuing the person to secure an arrest. Let me explain: SSA would notify law enforcement of an individual’s whereabouts and give law enforcement 60 days to enforce the warrant. Only if law enforcement failed to execute the warrant did SSA suspend benefits based on the warrant, cutting off benefits to those whose old warrants did not justify prosecution. Like Tony Gonzales, an Oregon resident, whose Social Security retirement benefits were suspended because of a warrant for unauthorized use of a motor vehicle in Los Angeles County, California when he was a teenager.

Proponents of the Act claim that it will help local law enforcement do their jobs better. But that’s not true. Law enforcement is already notified of the whereabouts of every person with a felony, probation, or parole warrant who turns up in the SSA’s databases. The CUFF Act would not help police secure the arrest of people they are seeking for serious crimes. All it would do is punish people like Rosa, who never committed a crime, or Joseph, who, even if he’d known about his outstanding warrant, wouldn’t have been able to afford to travel Texas to clear it. The CUFF Act is a bad idea aimed at some of the poorest people in the United States—people who are no longer able to work due to age or disability, and who depend on their meager monthly benefits to pay for necessities like food, shelter, clothing, and health care. Write to your representative and tell him or her not to support HR 2504 because you don’t want to make poor people suffer even more than they already are. And please share this blog over Twitter and Facebook.