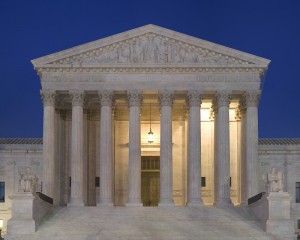 justice through the courts as telecom companies, oil giants, automakers, and the tobacco industry, you should be very disappointed in today’s Supreme Court decision in Armstrong v. Exceptional Child Center.

The decision today rejected Idaho health care providers’ attempt to enforce a provision of the Medicaid Act that requires states to ensure that doctors and other Medicaid-participating providers are adequately paid.

Unfortunately, today’s majority decision fits a disturbing pattern, in which the Court goes out of its way to deny access to justice for poor people, while allowing corporations similar rights.

The Supremacy Clause has routinely been used by large companies to sue states on the grounds that their regulations interfere with their ability do business, yet people who rely on social safety net like Medicaid are now denied equivalent access to the courts.

In the past, Justice in Aging has effectively used the Supremacy Clause to counter state policies that unreasonably deny poor seniors access to needed in-home care, or medical equipment. With this Supreme Court decision, the bar to get into court has been raised much higher. Justice in Aging will not stop fighting for our clients’ rights to their day in court. We will continue to partner with progressive legal advocates to fight for the rights of poor seniors and others.